If your parents were anything like mine, then you were probably tossed into the deep end and had to learn how to swim from there. You could say that is what it felt like to jump on the World Cup circuit for the first time, spend 4 straight months in Europe (which is my longest streak yet), and travel across 10 different countries. I am going to admit, the first few weekends on the World Cup were really tough. I had some expectations and goals based off the end of last season, but I fell short of what I had hoped for—not just in results—but in my general form as well (unfortunately in part due to being injured the 5 months leading up to the season). Fortunately, just like your parents are there to help you learn how to swim, I was surrounded by teammates, coaches, family, and friends, who were there to support me and help show me the way.

As most of you know, it was a historic year for the cross-country team not only at the Olympics, but on the World Cup as well. I am lucky enough to call these athletes and coaches my team; they support me, push me, impart wisdom on me, and inspire me everyday to be better. The best part is that even though they are doing extraordinary things, they are still ordinary human beings who I can go on a walk with or play card games with. Although I did not get quite the results I hoped for in some of my World Cup starts, I took away as much as I could from my experiences and was happy with my upward trend so that the next time around, I am skiing (swimming) a little better.

The season did not end after my World Cups though, it continued on with an unfortunate continuous plague of illness/es for 8 weeks (but lets just skip that part and fast forward to the good stuff). By the time March came rolling around, I finally found the race fitness I had been searching for and that is where the true fun began! Ironically, racing is more fun when you can really push your body to the limits and go deep into the pain cave and hurt badly. Our U.S. domestic team arrived in Spain for OPA Cup Finals and I was more eager than ever to race. After having many disappointing moments during the season, any chance to race healthy and feel good was an opportunity to race the way I believed I could. I finished off my 4 months in Europe with my strongest OPA Cup results yet, with a 3rd place in the sprint, and a 5th place overall in the mini tour, with 2nd fastest time of day in the pursuit!

I carried this good momentum right into our Super Tour Finals/U.S. Nationals in Craftsbury only a few days later to wrap up the season. I was really happy with how my sprint, 10km, and relay leg went so decided to go out with a bang by racing my first ever 30km to finish off the season! To my surprise, I had SO much fun racing the 30km and had a really good race (with no bonking or blowing up). Although most of my season did not go as planned, I am happy that I got my “bad days” out of the way and was able to finish off the season strong with 7 good races in a row, each one better than the last! I think one of the advantages of finishing the season off strong is that it leaves me even more motivated for next year. However, ending the season with 7 races in 12 days has left me ready for some serious rest and recovery before the training for next year begins. 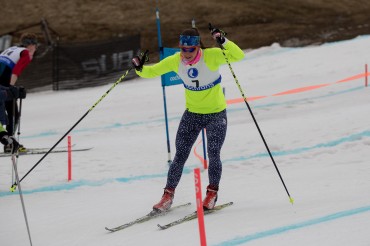 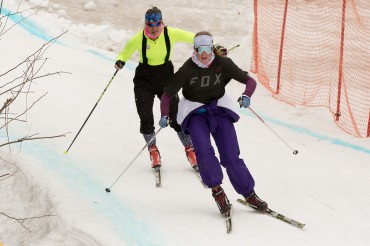 with the family on easter.

…and some spring skiing with my family on Easter.

You could call it a year of unpredicted adventures, a learning year, a wild rollercoaster ride—but most of all—a year that has left me wanting to race with the best more than ever! A huge thank you to everyone who has supported me, I couldn’t do it without you guys! Your belief, cheers, words of encouragement, and enthusiasm is what kept me going through the tough times this season and is why I love this sport and community so much, so thank you!

〰️Forward focus 〰️ (📷: @usskiteam )
Happy birthday to the best mom I could ever ask for ❤️ Thanks for supporting me in all of my passions, coaching me, finding the positives to everything, and always there to give me a big hug no matter what, love you mom 💕
Remembering how to stride and glide after 6 weeks of skate races 😱 Looking forward to using this race block to build fitness and climb 🆙 (📷: @nordicfocus ) #upandup
Cheers to quitting single-use plastic bottles! Join me and my team today 💧💧
Can’t help but have FUN when teaming up with @sophiecaldwell in a crazy team sprint in front of a lively (bumping) crowd, which included my favorite fans, my family 💙 ⁣ #dreamteam #teamsprint #relaysocks #chaos #danceparty (📷: @nordicfocus )
A solid but tricky day, leaving me hungry for more. Revving the engine for the team sprint tomorrow with @sophiecaldwell !! 🚀 #citysprint #action #zoomzoom (📸: @nordicfocus )

Getting up to stuff in the mountain west